In today’s classrooms on at least one wall, there exists a whiteboard – used to be a blackboard but those days are long gone. I’m wondering then if maybe it’s almost time to sign off on whiteboards. Yes, I know we have those interactive numbers in many schools but even so…I’m not convinced they are being used to capacity.

Since it’s supposed to be summer in Melbourne – I say ‘supposed to be’, cause I’m currently at the beach in a lovely new house on holiday, just a few minutes walk from the beach, and it’s freezing… aside from that… what if the beach was a whiteboard? What might this look like?

This post was initially prompted and began swirling in my head by a couple of photos sent to me in November when most kids were busy studying for upcoming exams. It was cemented in me last night when walking along the beach here and happening upon some wonderful sand drawings. 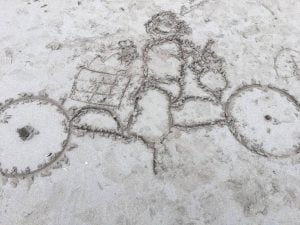 What prompts children (and adults) to write and draw in wet sand? Have you ever thought about it?

I bet you’ve done it.

Thomas was prompted to write in the sand while studying for his English exam. Yes, really. He scraped out quotes from his novel as a way to remember them. Funny. No one encouraged him to do it, in fact, he was on his own down at the beach and then…he picked up a stick.

He tells me he actually planned to walk down to the beach so he could write them in the sand. 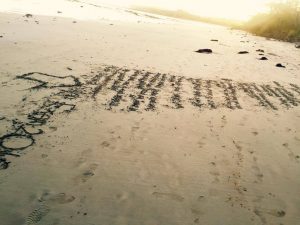 Thomas purposefully adapted his preference for learning and used his immediate access to the sand in order to learn.

As he stands back to admire his writing, passers-by are curious.

Is that what it is?

Thomas doesn’t think so – for him, he was just studying, thinking, adapting to his environment, taking advantage of what he had – a stick, a voglia, (desire) to explore learning, sand, prior knowledge and experience.

So what if the beach was a whiteboard?

Yesterday I spent quite a while making a new infogram about what Year 12 students must do over the Term 1 holidays. Before I publish these types of things I always seek my daughter’s opinion on the points  – she being in Year 12 – I find it is very important that she thinks it is worthwhile putting it ‘out there’. Well last night I got a response that I was not expecting – you can read it in the post heading…

I must admit, I was offended. I did try to explain how important it was but to no avail, so I just shut down and watched some mindless TV prior to one of my favourites on a Wednesday night – I love “The Good Wife” – are you shocked? 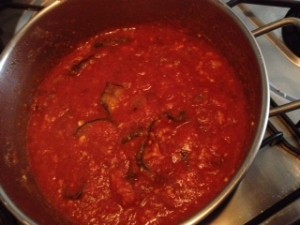 Anyhow, back to the point, I can be easily distracted, and am especially good at procrastinating with work although this tends to be an advantage for my family as I mostly procrastinate and avoid ‘work’ by cooking. BTW I have already prepared a Calabrian parmiggiano sauce for tonight’s dinner!

Fight it – back to topic at hand. So now after I’ve had a chance to think I’d like to propose 7 ‘interesting’ points that I hope will inspire Year 12s and in fact any student to ponder during the term break.

You’re tired. Tired of early wake ups, tired of trudging your way to school, tired of attending and listening to blablablabla lots of work to do, blablabla here’s the homework, blablabla SAC coming up next week, blablabla in preparation for SACs you need to … blablabla. Tired of coming home to do more work, prepare study notes, watch this video, read that text, complete these exercises, study, study, study. Am I warm? Okay then, why not take a break? Yes I know, your teachers have said that you need to do at least 10 hours of work over the holidays – and for Year 12s that’s for EACH subject! So that means 50 hours of homework /study, over 10 days, not counting the weekends, that’s 5 hours a day on average. So let’s break that down:

Okay, was that a bit more interesting, something you haven’t heard before?

Good! Now … let me spell out your 6 MUST DOs for the holidays…that is… if you WANT to do well in VCE / HSC at the end of the year. If not, well enjoy your holidays but don’t blame the system if you don’t achieve your best, whatever that might be + effort = satisfaction. Dreams + No / little effort = Disappointment. I’ll let you choose…

Here’s the infogram I prepared yesterday Let’s learn a few things about the Logic of English

think about it in terms of the word ‘circus’

we use double letters to shorten sounds in syllables, for example, sound out pepper, pep – per, otherwise we would pronounce it ‘peper’ pe – per

now let’s think about it as we apply the rules above;

Watch this Logic of English video

Do we teach this to our students? Could we? Would it make a difference to our understanding and development of reading and writing and would it improve spelling? Let me know what you think, click below and leave a reply.

Yes, it can be if you know how you like to learn things.

Check out this link for some ‘fun’ ideas to get you started.

Let me know what you think or if you want more ideas to suit your learning.