But when we asked our students at SEU/Monash the other day to give us feedback about their experiences in the conversation classes to date, the two came together as our Suzhou students shared their experiences using the de Bono hats.

It is amazing how they have opened up and shared both positive and not so positive experiences with us. Their confidence has soared over the last 10 days and more and more they actively volunteer responses and seek out further conversations. The hats activity was a testament to this.

I realise the last few posts have been about student responses but hey, that’s what we came to Suzhou to hear and it is music to our ears. So here are some of the responses the students shared.

“We connected with people studying other degrees.” (Yes! The students were divided up in our classes so two different disciplines came together).

“Facilitators encourage us, don’t laugh at us when we get it wrong.”

“I enjoy the classes as they are more active and participatory with lots of activities.” 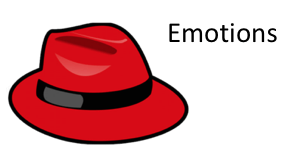 “I am happy to have the opportunity to speak English with native speakers.” Me: Guess what? My first

language is not English! (students gasp)

“I am happy because facilitators are friendly and ‘cute’.”

“I feel happy as there is no homework or test!!”

“Relaxed, so comfy to speak.”

It was interesting to hear this comment: “Ashamed because we are being taught by undergrads.”  (All our Suzhou students are studying their Master’s degrees).

And this one: Translation students thought their English should be better than other students who are studying different degrees.

“I enjoy the class but don’t like that it is during our lunchtime.” (Students here all eat lunch at noon)

“Too short, we need more classes!” (I hope someone really important is reading and perhaps can accommodate this request! We’d love to do it again)

“Interesting getting to learn a different style of teaching.”

A couple of students expressed their desire to now take up teaching given their positive experience! Now that’s a great idea!!

“This has helped me put English into a bigger context.”

And I’ve left the best till last…

“Even though we had only 10 hours [of English conversational classes], in 2 weeks our time will stay with me for the rest of my life.” (I’ll admit there may have been a tear in my eye when I heard this reported back from another facilitator).

Our students here at SEU/Monash have completed the first seven workshops, beginning with simple concepts such as appropriate greetings, addressing different people, conversation patterns, interjections, and body language and are now moving into more complex areas. Tuesday’s workshops, for example, were all about “Voicing your opinion” in the context of an academic English university classroom. 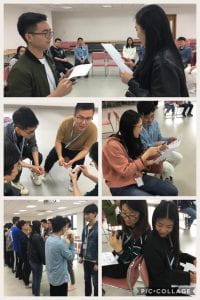 In a university environment, where classes are held in English, tutors expect their students to be active learners. One way this is evident is through discussion and voicing opinions about the learning. It is through such activities that tutors get a sense of how students are engaging with the material and how they can critically analyse and formulate opinions about the different concepts and ideas presented.

In our workshops, students were asked to voice their opinions on various scenarios associated with university learning. One such scenario included enforcement of a new rule where homework, assignments and theses would now have to be handwritten to ensure students were completing all their own work. This proclamation was met with surprise, disbelief and awkward shifting in their chairs. In their groups, the students had to formulate arguments for and against the concept and convince others that it was either a good idea or that it needed reviewing. I thought I’d share some of the arguments they wrote down.

It’s a waste of time

Handwriting is not formal.

Unconvenient [sic] for teachers to review and check repeatation [sic].

People can copy the homework by hand also.

Pay more attention on the handwriting rather than content.

Inconvenient to submit your homework by email.

Teachers have difficulty recognizing some hand-writing.

Typewriter will be useless.

Convenient to write some math formulas.

If we forget to save the document, we will lose it.

Can record our thinking/ideas easily.

My favourite response was this: Handwriting would mean we have more time to think about it, our attention will be focused. If we write more, we will write more beautiful English.

For me, this is what learning is about. Thinking, feeling, seeing, doing, and most importantly loving it.

Yesterday I woke up to a group of people out in the courtyard singing happy birthday to Paolo. This is not anything unusual except that it was 5:30 in the morning! In my stupor, I couldn’t decide if they were still up from the night before welcoming the birthday in or if they just got up early to make the most of the special day. Either way it made me feel happy and writing this post today is special because my dad turns 89 today! Happy Birthday, Pa!

That aside, it got me thinking about the idea for this post.

What else have I heard over the last couple of days in our Suzhou English conversational classes that made me feel happy? Better still, what have my colleagues heard?

Allow me to take you on a little adventure where we discover some of the wonderful things our Suzhou students have shared, not only with us but even between themselves. 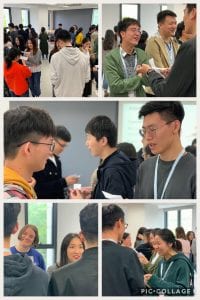 After speed dating style introductions exploring conversation patterns, we asked the students about their experience. One said that he thought the conversation was ‘excellent’ as he did not know the person he was speaking with and that now he felt they could become good friends!

This makes us happy as the students build their confidence in introducing themselves using the English language with other students.

A group of female students spy one of our facilitators taking off his Monash hoodie. One comments, “He’s just so attractive!” “Yeah I know,” says another, “even when he’s taking his jumper off!” I inquired as to how the facilitator had understood what they had said, only to be told the students had commented in English!!

This makes us happy as we have a rule that if we hear them speak other than English in class, they have to buy us bubble tea!

Pick up line to a facilitator on the first day of classes; “I have 2 tickets to the Avengers, would you like to come?”

Three students gossiping over a test instead of discussing the task at hand, suddenly realise that one of our facilitators has overheard them. Embarrassed, they stop abruptly and seem quite worried. Our facilitator simply replies, “Oh don’t worry, I’m just excited you’re speaking in English!!”

This makes us happy!

A young man and lady were overheard talking in class. The young man says to his partner, “and that’s why it’s really hard to talk to girls!”

A student comes to English Corner demanding to see a particular facilitator. “Where’s _____ ?” She said she’d be here!”

They have their favourites it seems.

The sassy student who corrected the facilitator greeting the class with “Good Evening.”

Now that’s confidence for you!

During the interjection segment of the class, a facilitator is explaining the different emphasis on Awww (sad) and Awww (when you spy something cute). One of the students explains it so succinctly. “The first is when your boyfriend hasn’t replied to your text message and the second is when he has.”

On our first day, we made it quite clear to the students that our conversation classes were not going to have tests or exams. And then we began distributing one of the tasks, a matching exercise, and a facilitator hears, “So much for no tests.”

One of the students in our workshops watches a scenario being played out by the facilitators around feedback and solving problems and says, “That’s so nice, can I work for you?”

Oh, and one more exchange not spoken but communicated on WeChat. This made us laugh!! 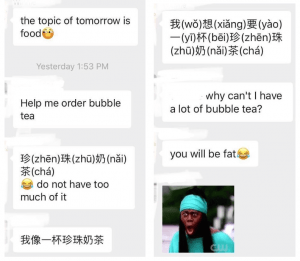 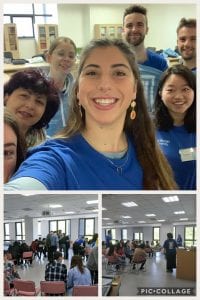 Yesterday was our first official day at South East University / Monash in Suzhou. I left our hotel full of self-doubt and angst. I have never felt so nervous, even though teaching is what I have done for the last 33 years. The welcoming party was wonderful. We met the staff at the university who put on a lovely morning tea but our conversations soon came to an end as it was time for our first sessions.

Here is Suzhou, we are privileged to be in spacious, well-equipped rooms, the natural light from the giant windows streaming in, everything up and operating AND the students arrive.

I’ve discovered that Let’s Chat comes naturally to us and once we start – well, there’s no stopping us. We have a great program and now we get to share it with our partners in Suzhou, China.

I’m with a great team of colleagues who are dedicated and determined to make this work. Our first day was a testament to that!

It’s been a while since I posted but I feel it’s time to share some learnings again. It’s not that I haven’t been learning in all this time – believe me I have. 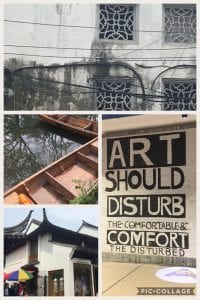 The beauty of Suzhou

I’ve been busy planning and writing in consultation with a great bunch of people from English Connect at Monash University. I’m currently writing from my spacious hotel room in Suzhou, China, where my colleagues and I will be for the next 2 weeks, facilitating English Conversational sessions with the students from Southeast University. I’ll be keeping you posted on a regular basis. This is an important alliance and one that I hope will be most successful and more importantly, make me a better learner.

We spent our first day in Suzhou getting our bearings and seeing some of the sights. It’s a delightful and eloquent city. I saw beauty in everything. I have many emotions. I almost feel helpless not knowing the language and with very little English signs and explanations I am lost – but I will be fine.

Over the next 2 weeks I know I will see, hear, feel, think and learn many new things. I can’t wait.