Our 25th Wedding Anniversary was pretty much all organised by our eldest daughter, who had spent the previous 6 months studying at Oxford Brooks University in Oxford, UK. I left her there after our visit to the Holy Land. After a week together in London and Oxford, checking it out to ensure she would be ok, I returned home on my own. That, I have to say was tough.

Anyhow, she organised it all. We just had to get to London. My husband, our youngest daughter Julia and I arrive in London on the 18th.

“Our road, Penywern, is actually prettier than our street from last time”

We stayed at London Town Hotel. Penywern Road is mostly white buildings that light up in Christmas blue at 4 pm – which is pretty much already dark.

While Nikola traveled on the bus from Oxford to London to meet us, we had breakfast.

“She arrives about 9:30 am. She looks good but sounds different … She’s become very independent like even more than she was at home!!” 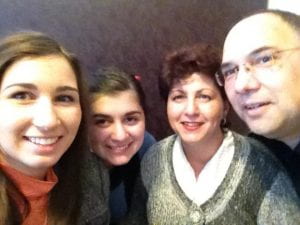 Day 1 over, we return to Earl’s Court, Nikola catches the bus back to Oxford. She has an exam the next day!

“Slept in, missed breakfast LOL! Dressed and off to Westminster Abbey. Porridge, danish and hot chocolate out front. LOL!”

After a tour of the Abbey and celebratory pre-Christmas ritual, Nikola meets us again outside and off we trot to Surprise number 3 – London Show of Billy Elliott at Victoria Palace Theatre!! Wow, wow, wow.

Finally, that night, we travel in a black cab to Surprise number 4! 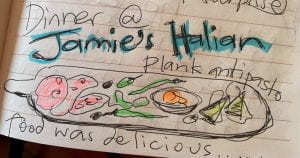 The whole time I was secretly hoping Jamie would come out to say hi, but alas, he wasn’t there. That aside, the meal was D-E-L-I-C-I-O-U-S. Our mains consisted of fritto misto, tagliatelle, chicken liver tortes and squid risotto!

“… and dessert, OMG they had BOMBA on the menu, same dessert served at our wedding back in 1986! I told the waiter who promptly brought a piece out with a candle – on the house! Only thing better was if Jaime himself had served it hahaha. Waiter blew me a kiss when we left. Great day – Thanks!”