In 2009 I joined my school group on a tour of the Western Front. It would be the first of several visits in the years to come. I could write lots more, but suffice to say these trips left an indelible mark on me. I will Never. Ever. Forget.

“The ‘real’ Western Front tour began yesterday … when I woke up this morning, the beautiful Cloth hall in the piazza was still there!”

The day before we had visited multiple sites traveling from Paris and onto the Western Front. We had our own bus with Fausto at the helm. A loveable character who spoke no English. We loved him, though I have no idea how we managed to tour the Western Front over the two weeks. It was a mix of broken second languages, lots of map pointing and patience but we got there! 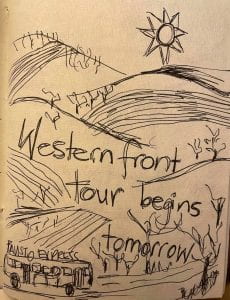 “Fausto, our bus driver is excellent, the best U-turner in the country. I speak to him in a mix of broken Spanish, Italian & French and he speaks back in Spanish!”

The Western Front experiences were many and varied. Each time we visited I saw and felt new things. We met many well know characters along the way, who openly and graciously shared of their experiences. I have always found it difficult to discuss my experiences of the Western Front and the emotions I felt. My journals were my escape, they were the ones with whom I shared, sometimes hurriedly scribbling what happened, many times just relishing in drawing, cutting and pasting. It was the time where I could pour out my day so that I would have room to ‘feel’ tomorrow. In this post I briefly touch on just 3 moments: seeing Cobbers, Otto Dix exhibition, and the Last Post at Menin Gate.

As we all stood solemnly around the sculpture of Cobbers, listening to Ian as he told the story. I was instantly catapulted back to my under-graduate days and into the sculpture studio at MCAE (Melbourne Uni). You see the sculptor, Peter Corlett, was my lecturer for a bit and here I was in front of the original piece, in Fromelles. (There’s a copy that stands as a memorial to Australian soldiers and their sacrifice at the Battle of Fromelles on July 19, 1916 in the Shrine Reserve in Melbourne if you’re interested in seeing it). However, nothing comes close to the feeling that comes over you standing on this land, in front of this sculpture looking over yonder at VC corner where so many of our boys fought and died.

It had been a full day but nothing prepared me for the images I saw at an exhibition later that day displaying the war etchings by Otto Dix. Harrowing. I could not draw them fast enough so I could leave and close my journal!!! 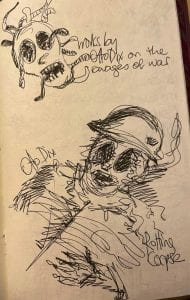 My hurried sketches of a skull and a rotting corpse

In Ypres, every night at 8pm the last post ceremony is held under the Menin Gate. It has taken place every night, whatever the weather, since 11 November 1929. The only exception to this was during the four years of the German occupation of Ypres from 20 May 1940 to 6 September 1944. 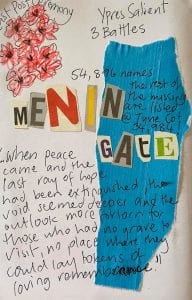